It has been shown that ozone beef applications increase the storage quality in meats, cause a decrease in the number of aerobic, mesophilic bacteria, coliform bacteria, and sulfite-reducing anaerobic bacteria, and extend the shelf life of meats.
It has been determined that showering the carcasses with ozonized water causes a better level of numerical decrease in the total aerobic organism compared to the classical washing method.

It has been observed that the use of 10-20 μg / litre ozone in warehouses extends the storage time of carcasses by 30 to 40%. In another study, the effect of ozone on the microorganisms on the meat surface was tried to be determined. It was determined that the development of several genera of the Enterobacteriaceae family was prevented in meats stored at 2,5-6 ° C and 92-95% relative humidity.

Again, when the cattle carcasses were ozonized continuously at 1.6 ° C and 95% relative humidity for 9 days (0.03 ppm), it was found that ozone prevented microbial growth on the carcass surface. In another study, it was found that ozone in beef stored in the refrigerator stopped microbial growth on the surface for a few days, improved sensory quality, and reduced the formation of volatile nitrogenous compounds.

Ozone has an antimicrobial effect against bacteria, mould, yeast, parasites, and viruses even when it is used in low concentrations and the contact time is short.

It is understood that more effective inactivation is achieved when the ozone time is increased and the pH and temperature are lowered, moreover, ozone facilitates lipid oxidation but does not change its sensory characteristics, does not lose the colour of the carcass, and does not produce unwanted odour, and extends the shelf life. 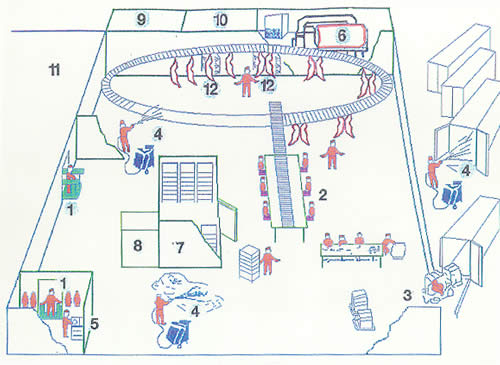 “Ozone is the most effective antimicrobial agent known. It kills E-coli 3,125 times faster than chlorine, and it converts into ordinary oxygen after the process, leaving no chemical residuals behind.”

Ozone technology offers many advantages to the beef industry. Its efficiency at ambient temperatures is as great as ultra-hot water. And water treated with ozone can be effectively reused requiring limited filtration. Ozonated water can be used anywhere in a packing or processing plant.

Anywhere you’re running water through pipes, you can use low-level ozonated water. You can use higher levels of ozonated water in cleaning off equipment, conveyor belts, hooks, and those sorts of things in addition to actually coming into contact with a food product.

Companies are also using our Low-level ozone generator range which are ideal for safe and reliable continuous pathogen control.  systems to maintain high hygiene levels all time. These systems provide low-level ozone which can be used in a gaseous form to help control mould, fungus, bacterial growth and mildew in areas like cold storage and holding rooms.

Ozone destroys pathogens by attacking and oxidizing the cell walls of the organism; the mucous membranes.

It doesn’t matter whether they are gram-positive or gram-negative. Whether they are spores, whether they are active, or whether they are amoeba-types (or microorganisms). The pathogens are all comprised of double-carbon bonds to hold the molecular structure together, and any microorganisms exposed to ozone will not just become benign in the water, but instead, will be completely evaporated. That’s because ozone will continue to break that molecular chain down until it’s nothing but carbon dioxide and water. Ozone Applications in Beef Industry is approved and showing great results for sanitizing equipment and disinfecting food product for beef processors.

Do you want to improve your disinfection process? Do you have a challenge? Contact Us!