What is UV Light (Ultraviolet Light)?

With the pandemic we are experiencing, UV Light, especially Germicidal UV Light, has become a very curious topic.

UV (ultraviolet) is called radiation with a Wavelength of UV Light ranging from 10 nm to 400 nm. Since the human eye can perceive rays above 400 nm wavelength, we cannot see UV rays. UV rays are divided into four according to their wavelengths. In the HVAC sector, UVC type short wave rays are used for disinfection.

Although UV light tubes seem like very new technology, their history is more than 100 years. Germicidal UV Light has been successfully applied for decades for disinfection in water treatment systems and food safety applications.

UV rays, on the other hand, are much older. UV rays, which have existed since the creation of the universe, awaited to be discovered for a very long time. German scientist Johann Wilhelm Ritter was the first to discover the existence of ultraviolet rays.

The wavelength of UV Light

As can be seen from the graphic in Figure 2, the germicidal effect of UV light is in the wavelength range of 220-300 nm. The wavelength at which this effect is highest is 265 nm. Many UV-C lamps on the market are low-pressure mercury type lamps and mostly produce beams of 253.7 nm wavelength. Although the 253.7 nm value is close to the peak, it should be known that microbes are not killed with 100% efficiency. In addition, considering the losses caused by the ballasts of the lamps, it can be said that the efficiency of UV lamps is quite low. It is accepted that an average low-pressure mercury UV lamp produces UV light at a rate of approximately 25-35% of the declared electrical power. 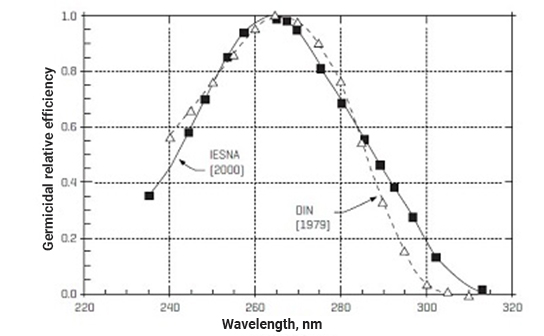 WHAT is a UV Lamp?

Ultraviolet sterilization and disinfection lamp is a device with a low-pressure mercury lamp that can emit ultraviolet rays. Low-pressure mercury lamps are excited with low mercury vapour pressure (<10-2Pa) to emit ultraviolet radiation. The wavelength is between 10 ~ 400nm. The wave crest of the lamp is 253.7nm and the power is between 4W-100W. In addition, LEDs for UV lamps can be produced with today’s LED technology. It is mainly used for disinfection, sterilization and air purification. It is also used for post-dyeing drying of UV-based ink in the printing and dyeing industry.

How Does Germicidal UV Disinfection Work?

UV rays cause photolysis and denaturing of bacterial proteins, disrupting and inactivating their cellular activities.

At the same time, when ultraviolet rays (a certain wavelength) pass through the air, the oxygen in the air is ionized to produce ozone, which increases the sterilization effect.

Can ozone be produced with UV Lamp?

Ozone + 185nm short wave ultraviolet rays destroy DNA by irradiating bacteria and ionize oxygen in the air to produce ozone and kill bacteria. So it has a double sterilization effect.

UV Light Guidances in the UK

Summary Practical Measures for Building Services Operation by The BESA 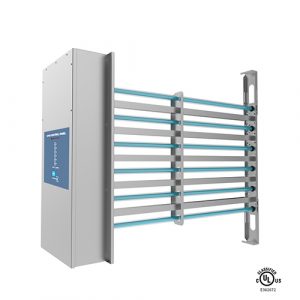