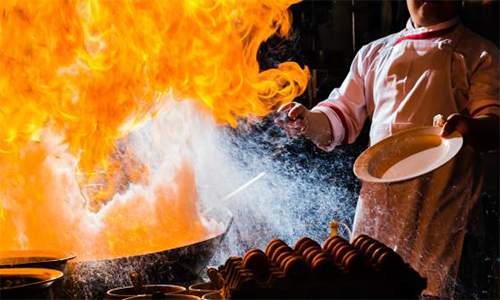 Keeping the canopies clean and hygienic allows to prevent and eliminate annoying problems of efficiency of the entire ventilation system and at the same time ensures the maintenance of a low fire risk.

Beside fire risk, problems associated with odours produced by cooking food, are wide-spreading and represent an increasing issue.

The substances responsible mainly include fat-acids, aliphatic and aromatic hydrocarbons, aromatic amines and aldehydes. The type and quantity of pollutants emitted depend mainly on what kind of product has been cooked, the cooking methods and the means used for cooking. There are many ways to filter odours, but there are no specific rules on “olfactory pollution”.

Odour is a complex phenomenon to understand not just for the wide range of potentially odorous substances, but mainly because the ability of a substance to be perceived by our olfactory system depends on different aspects that are both objective (volatility, water solubility, etc) that subjective (physiological and psychological of the observer) but can also involve the environment (temperature, pressure, the relative humidity of the air, speed and direction of the winds). This means that the same substance, at a distance from the source, is perceived differently by different people.

The odour compounds can constitute an important friction point between the restaurant/hotel/catering and the surrounding environment since smells are able to spread in large areas without that anybody can carry out resolutive interventions to contain it avoiding the exasperation of the people involved.

Kitchen UV technology is the most effective way to eliminate greases in kitchen hoods.

The ideal ventilation system in a large professional kitchen should include a portion containing UV lamps, possibly together with Titanium Dioxide (TiO2) and Silver Salts filtration systems. For the maintenance of cleanliness and a prolonged effect on the elimination of odours, it is often necessary to consider the application of UV lamps in combination with Ozone emission.

Kitchen UV lamps are mercury vapour bulbs that emit the specific wavelength of the C band (UV-C), capable of breaking the bonds of fat compounds by breaking them down into simpler molecules (H2O, CO2, etc.) creating what is scientifically called “cold combustion”. Some of these lamps are made of special transparent quartz at a wavelength of 180 nanometers, which is able to “transform” the molecules of Oxygen into molecules of Ozone (O3). The properties of ozone are both ultra-clean and persistent over time; ozone is in fact a highly unstable molecule, which tends to re-transform into oxygen soon.

Nevertheless, the application in the kitchens’ ventilation channels is very effective in eliminating odours precisely because ozone is able to “follow” the smells along with the ductwork, eliminating them before they are released outside.

In addition to those just listed, great advantages can be found especially with the combination of different technologies, achieving improvements for the management of the entire ventilation in kitchens.

Things to consider when choosing a UV System for a kitchen

There are various ways of applying UV, UV + Ozone and UV + Ozone + Titanium dioxide filters ​Once the specific situation has been analyzed, it is important to consider these essential points:

• The optimum airspeed must not exceed 2.5 m / s
• The application of UV systems is as efficient as it is closer to the source of the smoke. Being able to mount the UV systems immediately after the hood in fact enables not only to keep the surfaces clean from the initial stages, but the air “free” from fat compounds leaves no deposit in any part of the ventilation duct.
• Applied in the hood, it is necessary to ensure that the UV, the system is positioned so that the filters shield the outflow of the rays towards the operator and provide a microswitch for system easy OFF.
• Using ozone, it is always advisable to add a pressure switch that automatically switches off the UV system in the event of a stop in ventilation to guarantee operators’ safety.
• In the case of outlets at street level and the application of UV + Ozone systems, it is important to make sure that the Ozone has completely “turned back” into oxygen before the air comes out in the street. Usually, a few meters of the channel are required for this to happen, otherwise, the application of a second UV-ONLY system at the outlet can guarantee its complete elimination, UV-C rays “help” the O3 molecules to turn into O2.
• The application of UV, UV + Oz and UV + Oz + Titanium Dioxide combines perfectly with activated carbon filters. Not only these technologies fight odours effectively together, but carbon filters are greatly improved from the application of Ultraviolet rays, which increase their durability and efficiency.

UV-SMELL-SQ is a great solution for grease and odour control in professional kitchen extraction systems. Efficiently removes odour in your cooking fume, destroys the grease particles into carbon dioxide and water molecules.

If it is not the system you’re looking for, just contact us so we can provide the best solution to you. 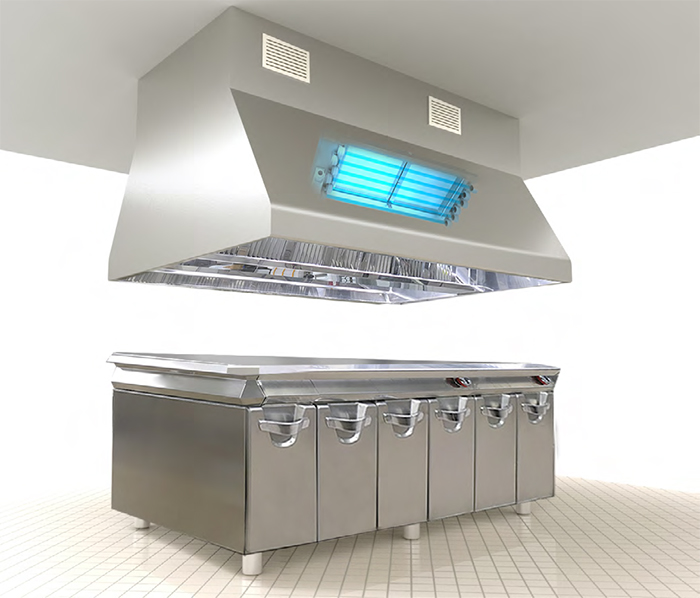