The explosion of big data and the constantly increasing need for more cloud computing has created a massive environmental challenge – how to reduce the emissions of data centres while still meeting the global data needs.
According to the International Energy Agency, data centres consume approximately 200 terawatt-hours (TWh) of electricity, or nearly 1% of global electricity demand, contributing to 0.3% of all global CO2 emissions.” Source: Forbes 2021

Eirgrid, the state-owned electric power transmission operator in Ireland stated the following in a recent paper“The number and scale of large data centres seeking to connect means that Ireland’s electricity demand is currently expected to grow by c.38% between 2017 and 2025, equivalent to the growth in the 50 years between 1930 and 1980, including the entire rural electrification programme” Source: EirGrid

In the EirGrid Generation Capacity Statement 2019-2028, they predict that the data centre capacity in Ireland could account for 29% of total demand by 2028. Source: EirGrid

The effect on the planet of rising CO2 emissions has been widely documented – The United Nations-backed Intergovernmental Panel on Climate Change produced a report investigating what is likely to happen to oceans, glaciers and ice caps if carbon emissions continue to rise. The report predicts dire effects such as high tides, storm surges, melting ice sheets and rising sea levels.

Rising to the Challenge of Reducing Energy Consumption in Data Centres

How can Data Centres reduce their energy consumption? Of their overall energy usage, it is estimated that the ventilation systems used to cool IT equipment in data centres account for over 40% of the overall energy used. (Source: Science Direct)

Research Gate corroborates these figures and gives an example of the percentage of energy that is used for cooling in the diagram below.

Therefore, reducing energy usage on ventilation will potentially have the single biggest effect on reducing energy consumption.
At Ozcon, we are passionate about helping all our customers find the most sustainable, ventilation systems that minimise energy consumption to protect the planet, create the best indoor air quality for employees and protect the well-being of staff responsible for the maintenance of the ventilation system.

Our solutions use cutting-edge technology that creates systems that offer the highest level of air filtration and air quality and significantly reduce energy consumption through the use of components that provide world-class, certified efficiency levels and eliminate landfill waste. These components include technology such as electrostatic precipitation. Our solutions also use recyclable (100% aluminium) and renewable materials. 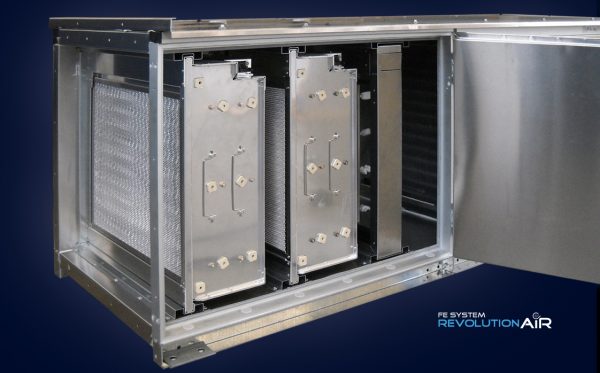 The FE system has been certified to a host of world recognised standards including EN ISO 16890, UL867, UNI 11254:2007, EN 1822:2005. These certifications are based on extensive testing by independent and international authorities such as the Hygiene Institute of Air ILH of Berlin, Polytechnic of Turin and the Technical Research Institute SP of Sweden and a host of others.
You can view the certs here:

These tests testify and certify the superior efficiency and air quality yielded by the FE system compared to traditional pocket and bag filters. (The FE filter has an A+ energy rating (Eurovent) compared to a C rating for a pocket filter).
The net effect of this is that the use of an FE filter system benefits both the planet and its inhabitants by reducing energy consumption (giving an excellent return on investment) and decreases pollution, providing better air quality for employees and by ensuring the safety of ventilation maintenance staff and reducing maintenance work load. 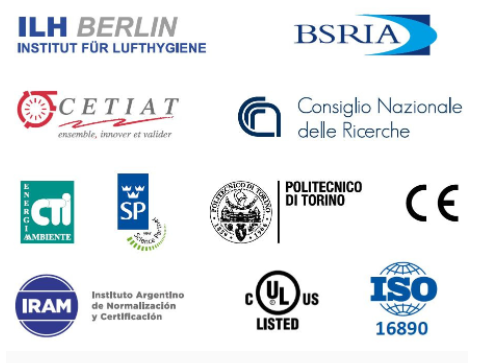 This range of active electrostatic filters with integrated electronics, the FE SYSTEM series, has been designed and developed to minimise the power consumption of an air handling plant. The Electrostatic filter FE SYSTEM is an alternative to the traditional pocket filter and was designed to simplify the use of electrostatic filters in Air Handling Units and Rooftops. Its use in ventilation systems, particularly in the air-conditioning sector, is simplified by the fact that the FE filter can be retrofitted into existing ventilation systems due to the standard housing sizes. 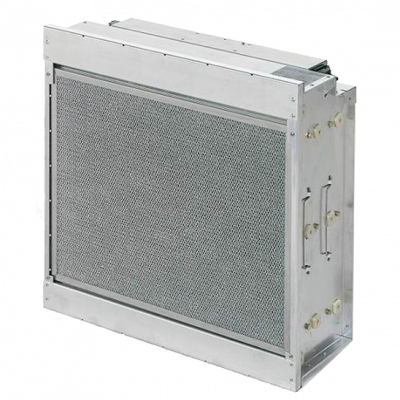 The electrostatic filter is made of electrostatically charged aluminium active plates. It consists of a purification treatment system that allows the separation of the polluting substances, (which can be either in a solid state (dust) or gaseous (oil vapours), from the incoming air flow.)

In ventilation systems, the air handling process can result in a significant waste of energy.
The amount of energy wasted depends on the pressure drop which is directly proportional to the efficiency class of the filters (and therefore the obstruction level) and the level of desired air quality inside the unit. The FE System filter is rated A+ (Eurovent) compared to a C rating for a pocket filter.

A mechanical air filter’s efficiency depends mainly on a mechanical capture of the particles in transit by the filtering fibrous matrix. This causes a progressive increase of the load losses, due to the accumulation of deposits and hence, as time passes, the filter becomes less efficient and uses more energy. 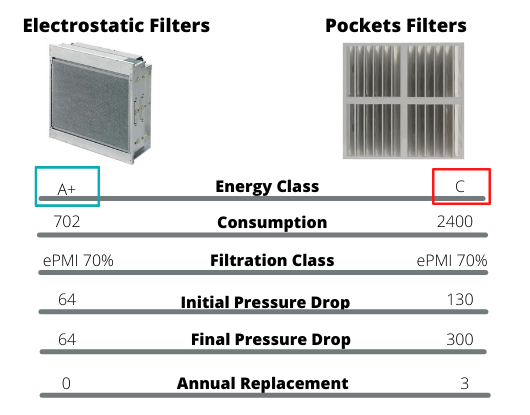 Studies have shown that electricity consumption reductions of over 30% have been achieved as a direct result of replacing bag or pocket filters with A+ rated FE System filters.

The quality of air produced by the FE System is verified by the many tests it has undergone. Below is an extract from one test on bacterial load and moulds carried out by the ILH Berlin – Institute for Air Hygiene 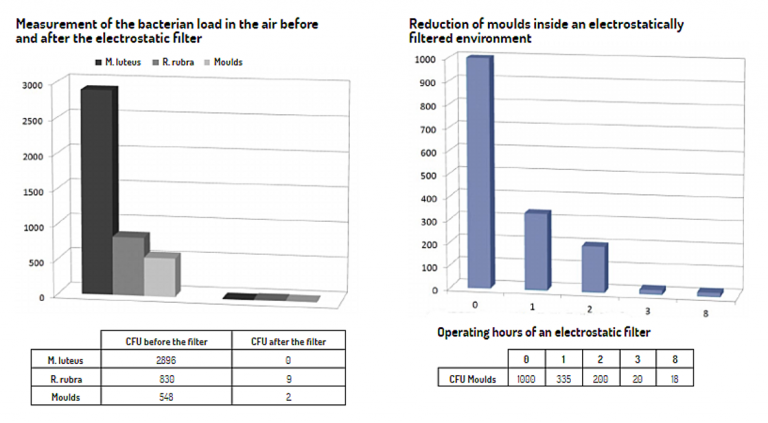 The main advantages of the Electrostatic Precipitators (ESPs) are the following:

The FE filter system has been installed around the globe, improving well-being, comfort, air hygiene and sustainability in indoor ventilation systems and making buildings more efficient, with low emissions and healthier through clean energy.
Our solutions allow us to supply new Air Handling Units using the FE filter or it can be retrofitted into existing Air Handling Units, Rooftop Units and ventilation ducts, due to the standard housing size of the FE filter. 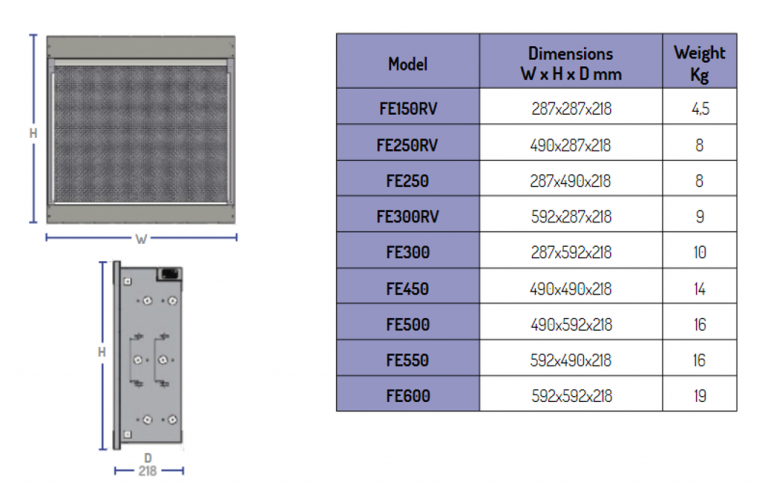 We offer consultations/advice about which system will save you the most energy, improve air quality and reduce landfill waste in your Data Centre. 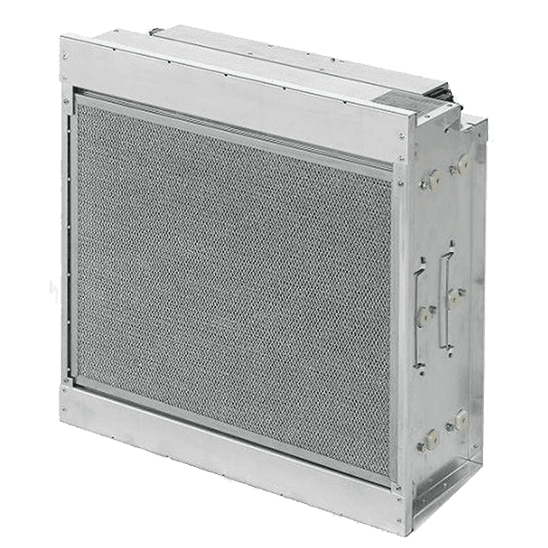