According to the World Bioenergy Association, the biogas production sector is one of the fastest growing sectors. Since the raw material is renewable, biogas plants generate green energy and contribute to a circular economy. Ozone applications in Biogas sector can be useful in several parts of the biogas production process. There are three main applications for ozone treatment in biogas plants.

Sulfur compounds and ions are commonly found at every stage of the biogas production process. These compounds often create problems that affect overall performance. High amounts of sulfur ions in the feedstock increase the sulfur reduction activity; bacteria (SRB) in the digestion inhibit the activity of methane-producing microorganisms such as “archaea”.

As a result, the process may cause odour and corrosion problems, as high concentrations of H2S (hydrogen sulfide) are released from the digestion, while the yield of methane production decreases. In particular, odour problems are common in biogas plants because H2S has one of the lowest known odour thresholds, and the human nose is sensitive to this odour.

Ozone has high oxidation properties. For example, when ozone is properly dosed into the waste activated sludge feedstock, the conversion to the biogas substrate can be greatly enhanced.

In many cases, such as biogas production from waste activated sludge, the results show that ozone treatment has a strong positive effect. This result is due to the high content of aerobic bacteria and intact organic matter in such raw material.

Under these conditions, ozone rapidly oxidizes any unsaturated bond, forming radicals that continue to oxidize other organic substances. This reaction mechanism leads to higher biodegradability of the raw material converted into higher biogas production. The increase in biogas production is proportional to the ozone injection in the system. The more ozone used, the higher the biodegradability and methane yield. 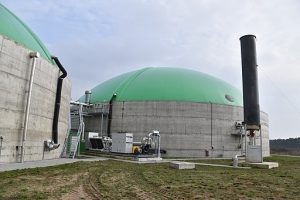 After the pretreatment stage, the raw material enters the digestion for biochemical conversion. In this unit, several types of microorganisms react at different stages with the feedstock.

The production of methane by anaerobic digestion can be carried out in a single-stage or two-stage process. The substrate is converted into methane with 50-55% concentration in biogas depending on the substrate type. It is possible to increase the methane by dividing it in a second stage called the methane boosting stage. Up to 70% of concentration is achieved in biogas. Therefore, the system becomes more efficient and the cost of biogas treatment below is reduced.

When biogas is produced through a two-stage process, ozone is injected into the digestion; It is possible to reduce the H2S concentration before increasing methane. In this way, H2S decreases before the production of methane and a more efficient system are obtained.

The odour is one of the biggest problems with the methane gas boosting process. This is due to the high sensitivity of the human nose to hydrogen sulfide. Because odour receptors are triggered for concentrations in the range of one billion (ppb). Therefore, even a small leak in the process lines or an opening in a process step can create an odour problem for a large area, the emitted gas must be diluted 200,000 times before the odour is masked.

You can check our ozone generators by clicking here.